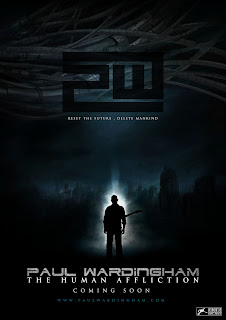 Wardingham, who released his acclaimed debut 'Assimilate Regenerate' in 2011 through Enigmatic Records, says this second full-length will be a concept album.

“I wasn't planning on making an album like this for a few years, but the music began to take on a life of its own and a story materialized from the themes of each track” says Wardingham. “Assimilate Regenerate was conceptual in that it was inspired by science fiction, future technology and the effect it has on society, and I have always had visual references in my mind associated to the music I write, so it feels quite natural to progress to an album like this.”
Currently in the pre-production stage, Wardingham hints at what to expect stylistically from this new effort.
“I would say it's going to be darker, more progressive and more epic than 'Assimilate Regenerate', still with a heavy dose of melodic shred and ambient synth work like before.”

“We're all very excited about the direction of Paul's new album,” Enigmatic Records Marketing Director Johnny Cheng said. “Right now, we're working closely with Paul and DarkZen Design to articulate the album artwork, promotion and packaging. ‘The Human Affliction’ is going to be something very special.”
'The Human Affliction' is set to be released mid 2012.
For more information, go to www.paulwardingham.com, www.facebook.com/paulwardinghamofficial, and www.enigmaticrecords.com