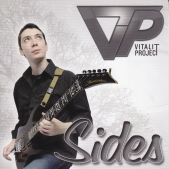 The brightest in the rock fusion world move the music forward with an awareness of what came before them. That is certainly true of Vitali Tkachenka. A native of Belarus, Vitali began his formal music training under the guidance of widely respected Yuri Dzmitrieu of the Ethno-Trio Troitsa. Under Dzmitrieu's instruction, Vitali was introduced to and profoundly influenced by artists and musicians such as Eric Clapton, Steve Val, George Benson, Eric Johnoson, Joe Satrianl, Al Di Meola, and Gary Moore. Vitali assembles diverse elements in a way that feels natural. He pays homage to his musical roots while pushing beyond those sometimes limited boundaries, taking us on a delightful musical journey. Throughout the pleasing selection of tracks found on Sides, Vitali T weaves a fusion of new age jazz that flourishes with rock and roll, and a presence of burnished soul. The record moves in-between the tracks quite well, allowing them to bleed into each other, benefiting the cohesive feel of the album. The emotional core of the album is felt through the ebb and flow of each song, and leaves the listener in a state of pure delight. This guy has amazing technique. His feel is incredible, his tone is second to none, and the composition and phrasing are just perfection. If you think Steve Vai, Joe Satriani, Larry Carlton, Pat Metheny and Mike Stern are great, this album is for you.