Brian May: Queen to play Sonisphere 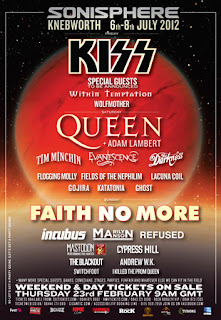 QUEEN are to return to play a second concert at the venue that provided them with the setting for one of their biggest and most historic concerts.

QUEEN’s Brian May and Roger Taylor have confirmed the band will headline the second day of SONISPHERE appearing on the APOLLO stage on Saturday July 7. KNEBWORTH was the setting for QUEEN’s final concert with Freddie Mercury in August 1986.

May and Taylor also confirmed that for this very special event they will be joined by US singer-songwriter ADAM LAMBERT.

The potent chemistry between QUEEN and Lambert broke the surface when at the invitation of Brian May and Roger Taylor, Lambert joined them for the closing showcase at the recent MTV Europe Awards where QUEEN were present to collect their Global Icon award.

Says Brian May: “Judging by my incoming mail, this decision will make a lot of people very happy. It’s a worthy challenge for us, and I’m sure Adam would meet with Freddie’s approval! And what better place to revisit, and walk those emotional paths than Knebworth? It will be a rush.”