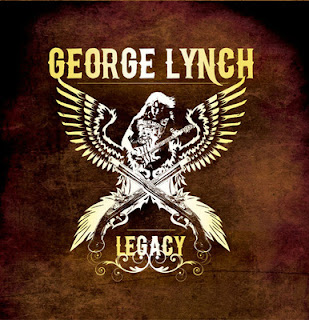 
This special edition EP release celebrates thirty years of George Lynch’s guitar playing with an amazing 4 track offering for the fans. Legacy injects us with a super charged dose of George’s signature style and proves once again why he’s one of the most respected guitar players of the last 3 decades!

Track #1 "Blood Drive" ignites this disc with an upbeat catchy rock track that has a real early VH meets Satriani groove to it. Track #2 "Circulo Del Fuego" offers us a well constructed rocker that incorporates all of George's legendary playing style. Track 3 "Invoid" can best be best described as "Mr Scary" meets "Tooth and Nail", it's laced from start to finish with amazing guitar technique and killer tone. Track #4 "The Road Ahead" is a haunting ballad style number that combines all the flavor & melodic angst of the late 80's but with a modern tone.

Legacy is a straight forward offering with a classic metal vibe and is a must have for any true fan of this elite guitar legend! You can hear the track “Invoid” in it’s entirety on EBR Nation (Part 5) “Reckoning Day” a short film in the continuing documentary series on American motorcycle icon Erik Buell and his motorcycle company.

In addition to Legacy, Rat Pak Records is proud to announce that we will be releasing the new Lynch Mob CD sometime early this summer. The release is not yet titled but we’ve heard the early demos and we can say with confidence that this is their best material to date. This line-up is a more focused Lynch Mob than we’ve ever seen before and they are hungry to bring their “A-game” to the masses! With Oni Logan, George Lynch, Robbie Crane, and Scot Coogan, you just can’t go wrong!

George Lynch Ultimate Fan Pre-order bundle! (PLEASE NOTE: There are only 25 of these available! Once you have made purchase we will contact you for the date) 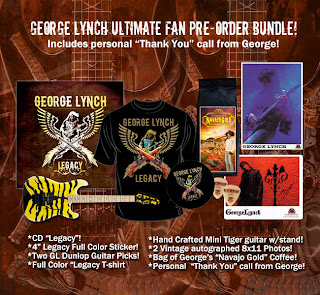 George Lynch Ultimate Fan Pre-order bundle!
(only 25 of these bundles will be available!) yes please