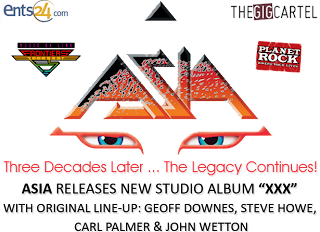 Planet Rock will launch an exclusive 48-hour ticket pre-sale for ASIA’s UK-leg of the 30th Anniversary tour at 9am on Wednesday April 25th. Fans can order their tickets from www.planetrock.com. From Friday April 27th, tickets will go on sale to the general public from the 24 Hour Ticket Hotline: 0844 478 0898,www.thegigcartel.com.


ASIA will play the following UK concerts in December 2012: