Jude Gold,Jason Becker: original Peavey signature given a run out! 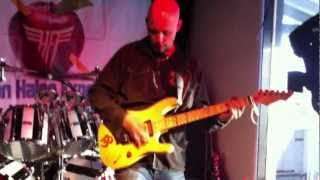 Wielding Jason Becker's original Peavey signature model guitar (on loan from Jason), guitarist Jude Gold plays Becker's great solo on the David Lee Roth song, "It's Showtime," from the 1991 Roth solo album A Little Ain't Enough. (This clip was filmed at a soundcheck in a bar the night before Jude performed the song at the sold-out "Not Dead Yet" Jason Becker benefit concert at Slim's, San Francisco, March 2011, at which Becker was in attendance.) RIG: Mesa/Boogie Stiletto Deuce through a Marshall 4x12 cabinet.

The famous Becker solo starts at 0:15.

From Wikipedia: A Little Ain't Enough is the third full-length album by David Lee Roth (of Van Halen), released in 1991. It was certified gold on April 11, 1991. Produced by Bob Rock, the album featured the lead guitar work of Jason Becker, a then up-and-coming guitarist who was diagnosed with amyotrophic lateral sclerosis (ALS, aka Lou Gehrig's Disease) a week after joining the band. He managed to finish recording the album, but was unable to tour in support of the album, as his condition left him with little strength in his hands.