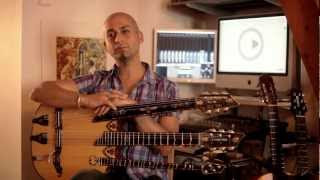 http://www.Shahab-Tolouie.com/fusetar
FuseTar " Lucifer", is a triple neck (guitar), 16-stringed, new hand-made music instrument, created by Iranian multi-instrumentalist and composer Shahab Tolouie. It took a year and half for two luthiers Mehr & Owrang (Crimson Oath) to build the FuseTar.
The name is derived from "fuse" -- English for "fusion" and "tar" -- Farsi for "strings"; hence 'fusion of strings'. The nickname Lucifer is that of the mythological morning star, the bearer of light. 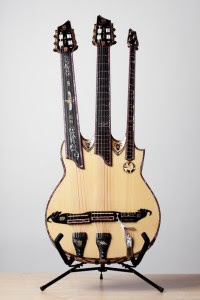 The uppermost is a fretless neck, which makes possible to play the quarter-tones peculiar to eastern music. The middle neck is the 'guitar neck', a combination flamenco/jazz guitar configured with the "true temperament" fretting technology, which produces more accurate intonations and longer sustain than a normal guitar and is used, for example, by John McLaughlin and Steve Vai. The third neck is a Persian 'setar neck' with four strings fretted for quartertones, a traditional instrument whose roots stretch back 2,000 years. This is the first time a traditional Persian instrument has been modernized with the fixed, "True Temperament" fretting system.