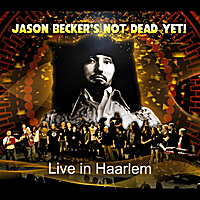 This live cd is a snapshot out of 6 hours of live music played on November 13, 2011. Contributing artists Guthrie Govan, Stuart Hamm, Marco Sfogli, Stephan Forte, Andy James and many others played for Jason Becker to get more awareness for the disease ALS
Genre: Metal/Punk: Guitar Virtuoso
Release Date: 2012

ABOUT THIS ALBUM
Album Notes
On November 13, 2011, a 6-hour guitar festival was held to honor Jason Becker, the incredible guitarist known for his extraordinary work with Cacophony, David Lee Roth and Marty Friedman, among others. Out of deep respect for Jason and love of his work, each guitarist featured at this tribute show waived their usual performance fees, playing that day simply to honor one of their contemporaries and source of great influence: Jason Becker, a modern day guitar great. All notes played that night were dedicated to the great Jason Becker in support of his struggle against the disease ALS (Amyotrophic Lateral Sclerosis), which is a progressive neurodegenerative disease that affects nerve cells in the brain and the spinal cord.