July 01, 2012
[Laurie Monk] I particularly enjoyed the last show clinic you did with the interaction of yourself and then Mr Fastfinger joining you on stage from his lofty TV monitor. Does it take a lot of time to plan that sort of thing and is that the sort of thing that you worry that the technical gremlins might strike?


[Mr Fastfinger] It takes a good amount of focus to do it. And if there’s trouble: use the moment!

[Mika Tyyskä] Use the moment for creativity! Seriously these things need to be planned and scripted. This last Frankfurt demo was a little step forward to the direction I've wanted to go for a long time. Mr. Fastfinger is now more present on the overall show.  When I prepare new stuff for a show or demo, it seems that it’s really hard to practice the actual guitar performance. But on the other hand, at least Mr. Fastfinger will always perform perfect as long as the computer runs smooth!

[Laurie Monk] Laughs... as long as computer runs smooth... the best laid plans of Sensei's and men... I guess, Mika, that if Mr Fastfinger gets too big for his boots you can decide to downsize him to a 15 inch monitor or may be an iPad... 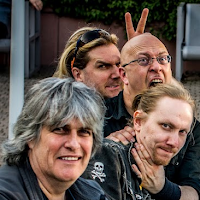