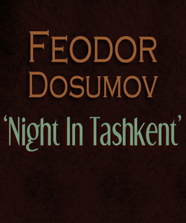 Feodor Dosumov is one of the rising stars of guitar improvisation and this brand new jam track video shows why. Available to download NOW including backing track, TAB, solo track and video at:

Feodor plays Elixir Strings. Check them out at: http://www.elixirstrings.com

Once again, Feodor Dosumov has gone and completely blown us away with his new jam track package. Every time we receive a new track from Feodor we know that it will be full of superb runs, licks and phrases as well as an intense and memorable performance. Night In Tashkent most certainly delivers all of the aforementioned.

When we sent the original rock backing track over to Feodor it was just under two minutes long. In true fashion he completely reconstructed it and made it his own, adding a whole new dimension to the track on the way. Plus, he turned it into a full length song, with his solo over three minutes long! Feodor mentioned that with this track he wanted to keep it in the rock vein, but add some interesting eastern scales into the mix too.
This is a great track for you to learn and a superb backing track for you to work out your own solos over too. It comes with complete TAB as well as the backing track and live video performance and is available to download for just £4.99.
Expect to see more Feodor very soon at Jam Track Central too