Steve Vai: musicradar get the scoop on the ULTRA guitar 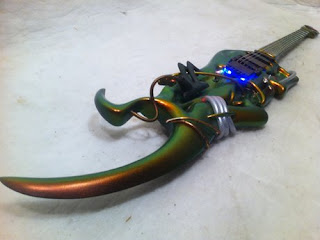 Steve Vai just kicked off his Story Of Light Tour, during which music fans will undoubtedly see the master guitarist perform with a variety of his Ibanez JEM Signature Series Steve Vai models.

But concertgoers might be in for something of a shock when Vai straps on an unorthodox, otherworldly looking instrument for the song The Ultra Zone - a one-of-a-kind Emerald Ultra guitar, custom-built for him by Alister Hay of the Ireland-based Emerald Guitars. http://www.musicradar.com/news/guitars/check-out-steve-vais-emerald-ultra-guitar-557868
Steve Vai