Article:"The universal language of music join the world together. Two Handed Player is a no profit showcase which searches for exceptional artists and promote the peace in the world by the love for the music. This is what you read on the homepage of this american site that each month searches and shows an artist in its main page.This September is the turn of a musician from Balangero, called Giancarlo Zaffoni, who showed up with an electric guitar version of the "Toccata per arpa", from italian composer Pietro Domenico Paradisi. This music is known for most of the people as "Intervallo RAI soundtrack".


Born in Lanzo in 1978, but living in Balangero, Giancarlo is the guitarist of Manosonora, a well known world-ambient music band, and of Voodoo Children, a rock cover band whose tracklist spans Beatles, Led Zeppelin, The Who, Police and Guns'n' Roses. He began playing guitar at age of 13, at the boys and girls club (in italian is translated as "oratorio") in his hometown. "I got into guitar after watching Michael J. Fox acting Marty McFly, playing "Johnny B. Goode" in the movie "Back To The Future".

In 1994, as a Christmas gift, he receives his first electric guitar, his most loved Fender Stratocaster. After having bought some methods, he goes on as a self-taught musician. In 2003 Giancarlo got graduated and with the money earned with his first job, he manages to take lessons from Max Arminchiardi, a very well known and appreciated guitarist at the time. But the real turning point, he says, is in 2008, when he joins the Lizard Music Academy. Here, with his teacher Tony De GRuttola, he can learn all his favourite musical genres: funky, jazz, classic and, of course, rock.

In his version of the Paradisi's hit, Giancarlo uses the "tapping" technique, a very famous and well known technique today. Tapping has become famous in the end of the '70s, by the work of the great Edward Van Halen. A that time, tapping was considered very futuristic, and suddenly had a very large number of followers, known as "'80s Guitar Heroes". The tapping technique consists actually in the use of the right hand on the fretboard, by "hammering" the strings and generating the desired notes. This technique allows you to play scales and arpeggios faster than other techniques.

Baba O'Riley (The Who) - CSI Theme - Synth on Tapping Guitar


Giancarlo has also been a school teacher in the past months, but now he can't go on with his teacher job, because of the new law regulamentation in teaching. "I got a bachelor in Aerospace Engineering, which now is actually unuseful. Since finding a job is almost a miracle, I've decided to get back to college and take the Master Degree. In the meantime I'll go on with my private guitar lessons". 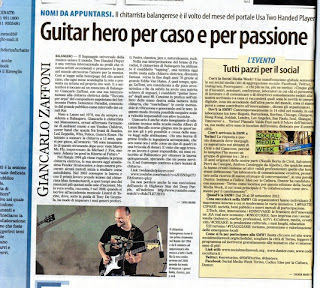