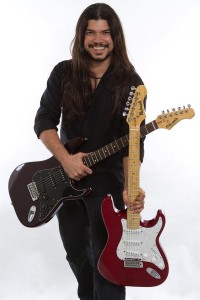 Webmaster: Let’s talk about the past! How did you started to play the guitar? Where did you study? Why did you choose rock and metal as your main musical direction?

Gustavo: Well… to be honest I made several steps to take this way… :) When I was very young I used to pick the tunes out with a keyboard that my father brought from some trip. Although it came easily to me, I didn’t take that seriously. I even exchanged the keys for Atari (popular video game console at that time). My God, it was long ago! Interestingly enough, I remember my father always trying to make me excited in some way with the music. He gave me some Jimi Hendrix to listen, but I think it didn’t work ‘cos it was too early for me and I was yet not ready for that. Some time later when I became a teenager I’ve got a few lessons of the woodwind flute in the college and all in the house had their ears full with songs from my lessons and my own compositions. It’s so cool to remember all that! So, when I was 13-14, I got an acoustic guitar that collected dust in my house and the story began! Soon I succeeded to play songs from music magazines bought in news-stands and to pick out some melodies by ear, also I created some stuff myself. It was a time when the Rock really came into the world and it was Rock itself who has chosen me hehe! I saw a guy called Clovis Mourad playing on the beach, also there was a stand near my house where rock’n roll and metal played every Friday. I was really fascinated by that great guitarist and went to have lessons with him. I remember that on my very first lesson he taught me the pentatonic scale and some licks and I started improvising on the base that he had made. I returned home very happy and talked to my father: I’m doing solos! hehe