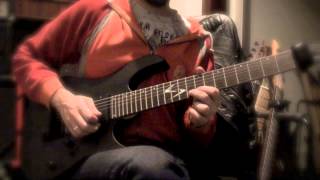 
by Fred Brum
My album Atonement is available (along with a free downloadable track athttp://fredbrum.com/atonement/ - please give it a listen. :)

This was a fun demo to do. Since I take reviewing kit quite seriously, I was interested in seeing how the bridge would react to some extreme mishaps, such as breaking multiple strings, extreme temperature variations (took it on stage on a cold day, shoved it under a rather hot spotlight, cut off up to 3 strings, taped strings together overnight, etc.) and it held its own admirably. A small demo of this stability is at the end of the video, and you can see the mechanics behind it at http://www.evertune.com

The song played here is Katana, which will be featured on my second album Transcendence. I used it because it's a fun song to play and since I intended it as a tip of the hat to Marty Friedman (I'm a huge fan ever since I was a kid), it's full of somewhat aggressive bends and some more frantic playing throughout, which puts the bridge through its paces. The guitar was never tuned after the beginning of the tracking session, and I played it this morning. The remaining strings are still in tune.

The song was recorded via my Presonus 22 VSL, fed by the Kemper Profiling using models of a DV Mark Triple6, Silverblade Hellhound, Laney Ironheart, Marshall 1987X and a Bad Cat, direct into the interface. The "posh hairband" things on my necks are Gruv Gear Fretwraps and the picks are assorted units from both SIk Pik and Hufschmid guitars.