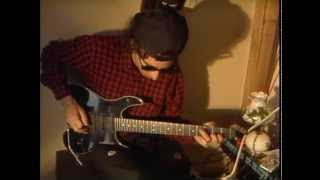 Sept. 30, 2012 - I just lost a long-time friend today, one of my longest. James Finley and I became acquainted through my older brother and before my voice had even changed. We ultimately became friends ourselves over the next several years. He was a one-of-a-kind human being and he was literally a one-of-a-kind guitar player and songwriter proficient in pop, rock, jazz, and classical guitar. His compositions are immediately recognizable as his own. Jimmy wrote songs with clever lyrics and also with profound lyrics, but the majority of his compositions are instrumentals with his signature fireworks guitar playing and which tell a story so vivid that lyrics are simply not necessary.

Jimmy's musical intellect was elevated so greatly that most guitar players might not fully understand what he was doing. With a simple brush stroke on his guitar at NAMM, for example, a nearby A-list guitarist might be intrigued and approach him and ask questions about his tuning...while an ego-ridden rock star guitarist within ear-shot would hear him, look over, then take off briskly in the opposite direction. Jimmy held his musical works above and beyond the reach of the music industry ravage, vowing to never settle for a deal that would impose a shred of compromise upon his work. Over time, this seemed to become a bittersweet personal choice of his; I myself have contemplated whether settling for such a label deal would have been the less satisfactory choice for him indeed.

On a personal level, Jimmy had one of the absolute biggest and most sincere hearts of anyone I've known, the most incredible wit and sense of humor, and possessed creativity and analytical perspective which were beyond compare. In his final years he was extremely humble, settling into his life in some ways and remaining unsettled in other ways. But regardless of how life might have been treating him at any given moment--good or bad--his love, his kindness, and his consideration always remained strong and unconditional toward his friends, one if which I am damn proud to have been. I will always love him, forever miss him, and I will never forget him.

(written by his friend Paul Kane)