This is a copy of an reply email I received after going to rush.com and asking the question on the contact us section about the release of Rush SACD dates. The previouse Rush thread that suggested October 21st as a possible release date along with Rush in Rio. I became suspicious that the Rush disks werent going to be released at least in October when I could find nothing on the net suggesting they would be."Hi there,Sorry for the delay in getting back to you, I was waitingto hear back from someone regarding your question.Apparently there was talk of creating these specialty discsbut it is actually not going to happen. If we do hear ofany plans to produce these discs in the future we will letyou know.Craig CameronShowtech Merchandising Inc."  forum 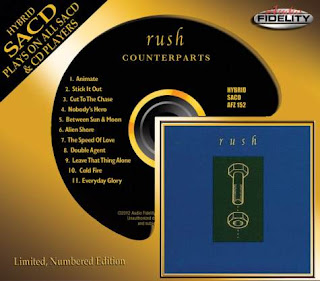 Audio Fidelitywill be releasing an SACD (Super Audio CD) version of Rush's Counterparts next month along with an SACD of Yes's Close to the Edge. These will be the company's first SACD releases in over 10 years.
http://www.rushisaband.com/blog/2012/11/12/3391/Audio-Fidelity-to-release-Rushs-Counterparts-on-SACD