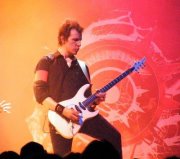 CHRISTOPHER AMOTT
Christopher Amott started his career in music in 1995 as a founding creative force and guitarist in Arch Enemy, a death metal band hailing from his home country of Sweden. In this context, he is known for his tastefully technical guitar work and memorably emotive playing style.

After garnering his early success, Christopher had the desire to express himself on a personal level in the same genre. At this time he began writing albums under the name Armageddon. Christopher wrote and recorded three albums over the next few years as Arch Enemy grew into an internationally recognized act, with his compositions featuring his own vocal stylings on the last album. This would be Christopher's first foray into singing and a spark of inspiration for his later musical ventures.

In 2008, Christopher began to consider his creative options as a mature musician. He began writing songs of an entirely different atmosphere, which saw his guitar playing focused less on technical ecstasy and more on a chord-based blues rock ambience as a foundation for more prominent vocal and lyrical ideas. These compositions developed into his next solo project; the album would be called “Follow Your Heart”, released under his own name in 2010.

During 2011 and 2012 work has proceeded on a new album called “Impulses” to be released in 2012. The new album will be a blend of all the things we’ve heard Christopher do thus far, along with new sounds and atmospheres as he moves further along his path in music.

TUNGSTEN
Imagine combining the psychadelica of 70’s Pink Floyd with the blistering guitar harmonies of 80’s Iron Maiden. Update those classic sounds with the modern progressiveness of Opeth and Mastodon, top the blend with vocals from one of Philadelphia’s most energetic and talented front-women, and you get Tungsten.

SWEET EUREKA
Though Sweet Eureka will be a fresh name to most, the band members will be familiar to many. Frontman/guitarist Jamie Victor (founding member of Victor Victor Band), drummer Ari Miller (formerly of Surgeon), and bass player Patrick Polli (TMT, Disciples, Cowgirls From Hell, Mandobot) are no strangers to the Philly/NYC music scene. With a nod to the masters of the past, as if Buddy Holly and Chuck Berry joined Black Sabbath and Band of Gypsys, Sweet Eureka cranks out raw guitar rock that isn't ashamed to be labeled as pop.