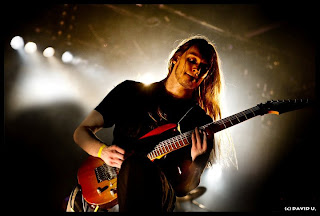 
A few years back when I was starting out producing and engineering other people´s music, I recorded 5 songs with an underground deathmetal-band called "Despotic", which consisted of my good friends Alexander Holzhey on Drums and Sebastian "Rudi" Schöttler on guitar, plus Martin Czerwinsky on guitar and vocals. Granted, the band was a small one and musically the material was quite uneven - however, I liked the band´s energy and thought this would be great opportunity to get a foot in the door as a producer of (metal) music.

So I agreed not only to produce, engineer and mix the recordings, but also ended up playing fretless bass on all songs. All of this I did for free, just to help out my 2 friends and to gain some experience (and of course to end up with a cool record in the end!). Little did I know that, after having recorded everything except for the vocals, Czerwinsky vanished into thin air, disbanded the group and left me with these unfinished recordings. Needless to say, I was pretty disappointed, having invested a lot of time and money ( I even bought a new fretless bass just for these recordings) into these songs.

Years later, my good friend Nikolas (now frontman of technical deathmetal group "Cerebric Turmoil") talked about doing a project together....you know, just for fun. However, with our individual schedules being pretty tight already, I suggested that instead of writing new music right away, he could first try singing on these unfinished tunes to see if there´s musical chemistry. So I quickly wrote some tongue-in-cheek metal-lyrics in just one afternoon and soon we started recording at Ole Kupfer´s (my bandmate in "Purpose Effect") home-studio. The 3 of us had a blast putting vocals on top of these old songs, with no intention of releasing the music to the public or anything like that. But having had so much fun recording this stuff, I thought: Hey, we got a good thing going here, maybe I should add some more stuff, finish this record and have closure. After all, I was still very proud of what I had done on bass and of course woulnd´t have minded sharing that with the public. But on the other hand, I didn´t want to use any of the orginal drum- and guitar tracks - after all, the quality was pretty rough and seemed to clash heavily with the new tracks we had recorded. So, I brought in some close friends to re-record all other instruments on top of my original bass-lines, thus ending up "covering" these songs - trying to stay true to their core, but altering the arrangements and adding new lyrics and vocal-lines on top of it - all of that in our spare time and without any budget. Given my reputation for being a little bit more adventurous when it comes to guitar parts, I wanted to give this record an extra twist: performing all the rhythm guitars on a fretless guitar seemed like a great idea to challenge myself and to give the songs more of an own identity, not to mention making it the first ever metal-record in history to feature both fretless guitar AND bass simultaneously.

So there you have it - the orginal songs of Despotic re-recorded and re-imagined by Fountainhead & friends.

These recordings are to be distributed for free. I do not charge anything and do no intend to make money off them - after all, I do not pretend to have written these songs (even though in their current form, the basslines, leadguitar-parts, lyrics and most of the vocallines were in fact written by me), and they´re not to be taken TOO seriously by the listener. All I ask is that if you like these songs, please share them with your friends and maybe stop by at www.thefountainhead.de and/or check out the other projects of the great people involved in the making of this record.