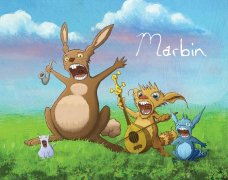 Some great solos by Dani and Danny! A song from their new album: Last Chapter of Dreaming

Marbin is an all instrumental band based in Chicago IL.
Marbin first started in 2007 as an improvised music duo consisting of Israeli-American guitarist Dani Rabin and Israeli saxophonist Danny Markovitch.[1] Markovitch and Rabin met shortly after Markovitch had completed his military service as an infantry sergeant and Rabin had graduated from Berklee College of Music.[2][3] Since 2008, Marbin has been living in Chicago and performing all over the United States, playing over 300 shows a year with the accompaniment of drummer Justyn Lawrence and Bassist Jae Gentile, making Marbin one of the busiest bands in the states. They have released three albums: Impressions of a City, as part of Paul Wertico's Mideast-Midwest Alliance, and two under the name Marbin,[4] Marbin as a duo, and Breaking the Cycle with drummer Paul Wertico (Pat Metheny Group), bassist Steve Rodby (Pat Metheny Group), and Jamey Haddad (Paul Simon). Marbin is currently signed to Moonjune Records and Management.
more info at http://marbinmusic.com/
Watch it in 720 HD for best results. Shot by K-Dawg.