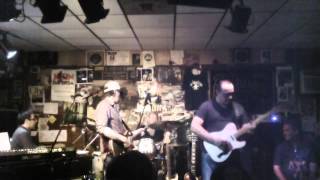 This was recorded at the Rock Candy Funk Party CD Release show at the Baked Potato in Studio City, CA on January 23, 2013. The CD is called "We Want Groove" http://jbstore.jbonamassa.com/rock-candy-funk-party/ This new project features Tal Bergman on drums, Ron DeJesus on guitar, Mike Merritt on Bass, Renato Neto on keyboards and Joe Bonamassa on guitar. It's a cool mix of 70's type jazzy funky blues; and is a real departure from Joe Bonamassa's traditional projects. The venue, the Baked Potato, is a pretty small club. (It has been correctly described as "about the size of your garage". I am going to be updating the videos with the song titles after I figure them out. If you should happen to know the name of the song, please let me know and I will update the title.