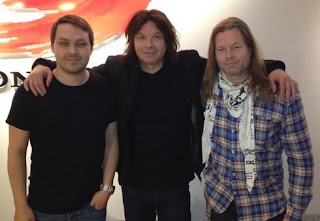 Official press release from Gain: GAIN SIGNS A RECORD DEAL WITH JOHN NORUM - Europe’s lead guitarist John Norum has signed a record deal with Gain/Sony Music. He will shortly enter the studio and record his new solo album, due to be released in September. John Norum released his first solo album ”Total Control” in 1987 and has made eight solo albums in total since then. The latest album “Play Yard Blues” came out in 2010. John has been working with Deep Purple’s front man Glenn Hughes and Don Dokken over the past years so don’t be surprised if there will be some other international guest appearances on the forth coming album. He will play live both as a solo artist and with Europe in 2013. Europe will do their 30-anniversary show as the headline act on Sweden Rock Festival in June 7th.
“It feels real good. I’m finally on the only real Swedish rock label with international ambitions”(John Norum)
“It’s gonna be great working with John Norum’s solo album. He’s one of the best and most respected guitarist in the world” (Markus Tagaris - GAIN)