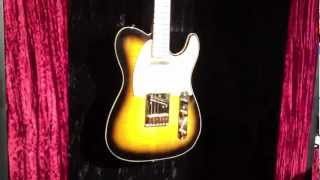 I was very lucky to see Richie Kotzen's interview about Fender telecaster Richie Kotzen's signature model at Fender booth. It was about to close for the day, I went to Fender booth and found him unexpectedly. After the interview, I asked him to take a picture and he did it for me. I went to his concert many times and know how great guitar player and singer he is. I think I can't sleep tonight due to excitement about talking to Mr.Richie Kotzen and taking a picture with him. He's going to publish new album soon. I've got to buy his album and go to concert to see him playing in person. He's so so amazing guitar player and singer. If you guys have a chance to see him playing and singing in person. you must go to see him.
Please enjoy the video about his explanation of his Fender Telecaster signature model.
Cheers,
Eddie