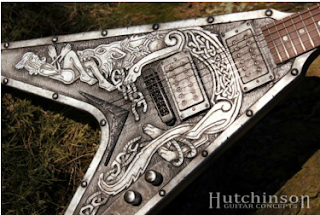 After last years success with three unique guitars designed and modified for James Hetfield of Metallica, Hutchinson Guitar Concepts summons up Norse mythology for the latest concept: the Viking V.According to myth, Fenrir is a monstrous wolf who prophecies foretell as being destined to harm the gods. The gods prepared three fetters to restrain Fenrir.

The first two: Leyding and Dromi were great iron fetters but could not bind Fenrir. The third was Gleipnir constructed by dwarfs from six mythical ingredients and while it appeared like silken ribbon it fully bound the mighty wolf and the gods fastened it to a great stone slab called Gjöll and anchored it in the ground by a rock.This restrained Fenir until Ragnarok when it is written all bonds will break and the Fenrisúlfr (Fenriswolf) shall devour the god Odin whole.

This amazing guitar is based on a Gibson Flying V and has been carved and crafted to look like a mighty iron Viking weapon of doom. It features the god Odin being devoured by Fenrir in a traditional anamorphic Celtic knotwork style. Hand wound pickups, a Schaller roller bridge and a custom V tailpiece specially cast for this guitar combine to produce a very unique instrument.More designs are available through the Hutchinson Guitar Concepts website, which features a portfolio of finished instruments that exert design inspiration from themes as diverse as Steampunk,Natural Disasters, and Chinese dynasties. 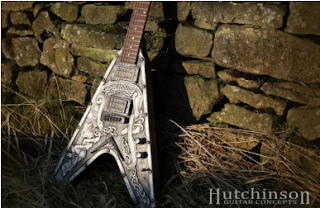 Hutchinson's Viking V, Cybertech, and Bronze Top guitars are just a few examples of what can be achieved through intricate wood carving, masterful finishing and state of the art electronics.Hundreds of hours of work go into every fine detail, ensuring that each Tibetan symbol is perfectly engraved, and each ripple of molten lava oozes and glows with incredible LED lighting effects.Every guitar featured in Hutchinson’s portfolio is available as a theme to order for your own guitar.