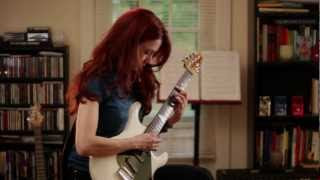 Rapidly gaining praise in the world of instrumental rock and beyond, Gretchen Menn isn't your average guitar hero on the rise. She once flew jets for an airline to support her six-string habit. She has studied, in equal parts, the music of Mozart, Beethoven, Steve Morse, Frank Zappa, and Jimmy Page. (Regarding the latter composer, she performs the music of Led Zeppelin professionally all over the U.S. with Zepparella.) Perhaps Michael Molenda, Guitar Player Magazine's editor-in-chief, described Gretchen's solo music best when he said that she "seeks the unknown by blending disparate jazz, prog, and world-music influences into a tasty, guitaristic thrill ride."