Jikki: Death and Rebirth of the Soul - track from new album 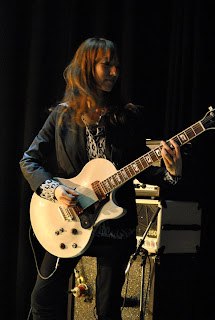 This is sounding great to me... looking forward to the release.

Jikki: Good evening! From yesterday, I started recording the guitar in earnest. Innovation is not a type if you know how to keep stakeholders to focus on one song too, for the time being, from the place where pop, I'm falling apart and start recording. Yesterday, the song that I'm going to the last song of the album, I recorded only clean arpeggios. It is a song that Patrick and Billy told me to play, because the sense of time great both for 2 people, feelings and at the same time .... good I play, too, because of my sense of time is lost Do not be! ! I think, I was feeling the pressure to play strangely nervous. Incidentally, since this seems to be the most difficult album, lead guitar of this song, I have thought from practicing for a while, and I want to face the recording ..... Arpeggio is played on the Virage's VOX! Today, I played the arpeggio of 156 fast-paced songs. Because I wanted to finish the mechanical feel, here, I play the guitar The honor student, at Suhr. Since I piled in the same octave and octave stacked two, a total of three. . . Arpeggio on, which was played in front of PU Suhr, arpeggio below, the front and center of Suhr played on the half-tone. The long end of the recording but still, I rather work hard in this vein! ! !