April 11, 2013
It was great to catch up with Timo Somers and Barend Courbois, both of whom are very busy guys. I'd not seen them since the amazing night supporting Jason Becker's "Not Dead Yet" cause in the Netherlands over one year ago. Both players were singing the praises of the new instruments that are made of a composite metal. The O1O and O2O, which are highly resonating electric guitar with loads of sustain combined with an excellent tone and made out of Arium. Barend Courbois has the O5O, a magnificent sounding five string bass. The bass is all handmade and designed by Bouwmeester van Rens. The Arium material and the one-piece construction make the bass resonate from headstock to body. 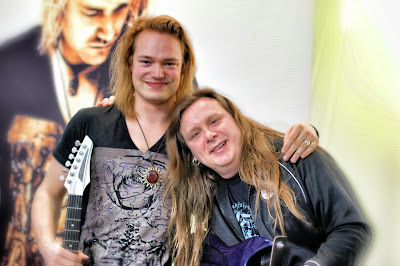 Timo Somers is a young Dutch guitar player, songwriter, producer and singer. He is known as the founder of Tri-Head and member of symphonic metal band Delain, legendary rock band Vengeance and Zylver.

Timo started exploring the world of guitar on his own, without any lessons or whatsoever when he was 12. "Music is the ultimate form of self-expression. I could not possibly imagine a life anymore without it, whether I am sad, happy, confused, crazy, I always find a way to express my feelings trough my guitar, a life without a guitar is like a life without a soul, for me. "Timo joined Vengeance when he was 17. When he was not touring Europe with them he wrote and recorded songs for his own song library.

At the age of 18 Timo started studying at the Rockacademie, which he quit a year later when he joined Dutch symphonic metal band Delain. He tours the world with them and played on their 3th studio album “We Are The Others”. On 28 february 2011 his dad, fellow guitar player, best friend and biggest inspiration Jan Somers passed away. Vengeance recorded the studio album “Crystal Eye” in his name. Timo appeared on two songs, “Promise me” and “Crystal Eye”. Shortly afterwards Timo was asked to join Zylver. A Dutch project with some of Holland's best session musicians. Their debut album “Van Verre” releases 3 September 2012.

Timo is currently working on his debut instrumental album together with Atma Anur (Journey, Richie Kotzen, Greg Howe, Jason Becker, etc), Barend Courbois (Blind Guardian, Vengeance) and specials guests... (Timo mentioned a name... but I can't pass it on just yet!) This project is called Timo Somers' Tri-Head. Their studio album will be released in 2012. Timo is also active as a studio/session guitar player and songwriter/producer.