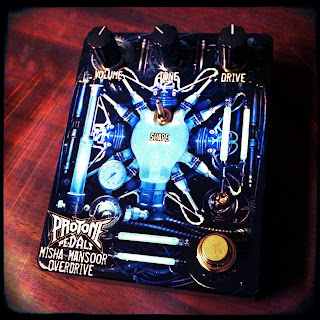 The Misha Mansoor Overdrive is Pro Tone's adaptation of the classic overdrive with some modern twists. Assembled by hand in the USA, Mishas pedal is based on the company's flagship overdrive, the Dead Horse, and features custom artwork from "Mister-Sam" Shearon, true hardwire bypass operation, durable construction, and the traditional volume, tone, and gain controls. In an effort to expand and improve upon its predecessor, the SHAPE (renamed to ATTACK) switch has been introduced offering a choice between the flat frequency response the Dead Horse is famous for to a more mid-range-hump tone that Misha and other modern metal players use to tighten up and add presence to their tone.


Misha Mansoor: "When I tried the ProTone Deadhorse for the first time, I was genuinely blown away. It seemed to me to be the first TS style overdrive where the primary intention was for it to be used as a modern style boost in front of a high gain amp. Even though it excels as a regular tube screamer, as a boost it just seemed to go much further than anything else I had tried. Given the opportunity to tweak the design, I thought that the option for an even tighter setting with an even more pronounced "mid hump" would be the perfect addition to round this pedal out for my uses. This is my favorite overdrive."


Misha's reputation as a guitarist, producer, and recording artist grew as a result of posting demos to several online forums under the pseudonym, "Bulb." Although Mansoor produced the self-titled Animals As Leaders debut album, Veil Of Maya's Eclipse, and Stray From The Path's Make Your Own History, he is best known for his work in the progressive metal band, Periphery.
Since 2008, Periphery has toured extensively sharing the stage with artists such as TesseracT, Between The Buried And Me, and Dream Theater. In 2010 the band released a music video for "Icarus Lives!" alongside their self-titled debut album. Periphery most recently wrapped up a tour with Deftones in support of their 2012 release, Periphery II: This Time It's Personal.