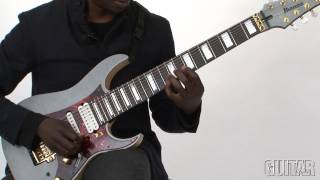 The following content is related to the June 2013 issue of Guitar World. For the full range of interviews, features, tabs and more, pick up the new issue on newsstands now, or in our online store: store.guitarworld.com/collections/guitar­-world/products/guitar-world-june-13-meg­adeth

To me, one of the most valuable study practices has been the exploration of arpeggios (also known as "broken chords," wherein each note of a chord is played individually and in succession) played across all the strings. Like most guitarists, I began on six-string and soon graduated to seven- and then eight-string guitar. This month, I'd like to demonstrate some cool ways to perform a variety of arpeggios on the seven-string guitar.