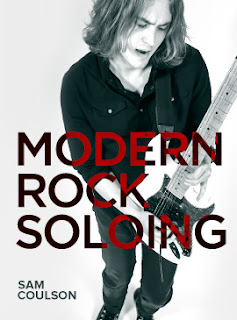 Sam Coulson is one talented young guitarist. He is one of these modern players that can bring many different faces to his improvising. We have seen him play some stunning Rock Blues in his first two series, and now he is back with some hard hitting Modern Rock Soloing that displays an abundance of great ideas. From the first track to the last Sam shows off some fabulously controlled bending techniques as well as some magical runs that are all well placed to these type of tracks. There is a lot to learn here with the bulk of the solos being of an intermediate level. However, there are quite a few advanced licks that creep into the mix as well....practise makes perfect!
The backing tracks themselves are 'in your face' QOTSA style tracks and have been created by Luke Roberts with nothing but jamming in mind. Instant "pick your guitar up and go" and loads of fun!
As ever, the package comes with complete accurate TAB and notation, solo and backing tracks, extended jam tracks and video performances for you to analyse.