Jeff Kollman: releases Brother To Brother dedicated to the memory of his brother, Tommy Kollman

on July 03, 2013
JEFF KOLLMAN (BOMBASTIC MEATBATS, COSMOSQUAD, GLENN HUGHES) has announced the release of his latest digital single, "Brother To Brother", dedicated to the memory of his brother and former EDWIN DARE band mate, Tommy Kollman, which is now available via iTunes and other outlets.

States Kollman: "I just started playing a song on the acoustic guitar. I realized as I was playing, I was writing it for brother Tommy. I was wondering when and if it would ever come.  I woke up and there it was."
Tommy Kollman was shot and killed by a sheriff’s deputy in his hometown of Ft. Myers, Florida in the early morning hours of December 15, 2012.  Kollman was allegedly pulled over in his car by the deputy and was then shot multiple times in the driver's seat of his Jeep.  Kollman never fired any shots but allegedly had an AK-47 rifle in his vehicle.  The incident is still under investigation.  Meanwhile, a Facebook page titled "Justice For Tommy Kollman" https://www.facebook.com/JusticeForTommyKollman has been set up and several rallies have been held in Ft. Myers Beach seeking more facts about the case. 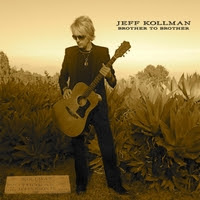