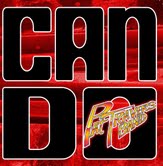 Pat Travers, Canadian-born and cosmopolitan, has brought his listeners and fans an engaging album in 2013's 'Can Do'. Released by Frontiers Records, the veteran guitarist's latest disc is chock-full of good songwriting. It's pure classy rock, topped off with his sizzling six-string licks.

The Pat Travers Band sounds fantastic. Alongside Travers, 2013's 'PTB' incarnation features Kirk McKim on guitar,Rodney O'Quinn on bass, and Sandy Gennaro on drums. Monica Travers, Pat's wife, sings background vocals on the Eurythmics cover. Travers shows that his voice is in fine form - masculine and full of character. Guitar work from McKim and rhythm guitar lines from Travers are both tight and chunky. The bass guitar from O'Quinn drives the band, subtle at times and at the forefront during others. Gennaro's drums are very solidly groovy, with a nice sprinkling of artful fills. Without saying 'too much', the lead guitar parts delivered by this experienced musician are tasteful, played strictly to serve the songs, and mind bendingly good.

'Can Do' has 12 tunes which are adventures in tone. The songs aren't all one mood, so listeners will be able to enjoy a variety of tempos, moods, and 'rock & roll flavors'. This is uncontrived classic rock, not outlandish or overbearing. That's not to say the record lacks flash: there's plenty to be found, but 'Can Do' is first and foremost a substantial, full-band effort. Without giving away all of the album's details, here are some highlights: 'Diamond Girl' features tasteful use of effects, smooth legato, and a pervasive, warm tone. This was the first 'radio single' from the album. It is much more laid-back and evocative of that 'relaxed summer afternoon' mood, then most of the other tunes. 'As Long As I'm With You' highlights some delectable slide work. 'Armed And Dangerous' is a funk-infused, bluesy rock number. 'Keep Calm & Carry On' has a title that's a nod to the famous British advertising slogan. This instrumental is another slightly funky, slightly bluesy, laid-back tune. It contains many interesting little vibrato effects, some neat explorations of tone, and nice harmony. It's an interesting trip through the land of electric guitar. 'Can Do' and 'Red Neck Boogie' both seem to be feature type songs. The album has been bookended with high energy rock tunes - a melodic arena rock monster and a catchy American boogie. These tunes are as fresh as they are adventurous.

Production is nice and full - it doesn't have that over-compressed or 'digital age' sound. 'Can Do' has an authentic, 'no-Autotune', traditional vibe throughout. If other instruments or items (like a vocal sample? in the second song) are heard, it's brief. Lyrics make sense and sections ought to resonate with many: "The world's going nuts, but it always has been..." Overall, the album is well-composed and nicely sequenced or presented. The drum or cymbal sound can be a little shrill at points, so listening at a slightly lower volume might be required. As usual, your mileage may vary. Ideas have been given ample time to shine: six of the songs are over five minutes long each, another two are close to five minutes long. The remaining four songs are in that radio-friendly three-to-four minute range.

Overall, 'Can Do' is a great record for a fan of timeless 'classic rock': it doesn't stray too far in to any sub genre nor is it excessively 'quirky'. Lots of rock's subgenres have moments to shine: blues, funk, arena rock, 'Southern boogie', even a touch of balladry. If you like your guitar-heavy rock loud, this is definitely a disc to check out more than once.

Thanks to J Mercer for the in depth review!
Pat Travers