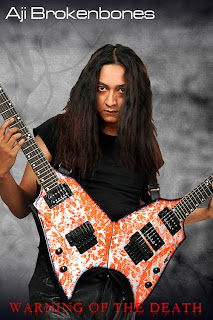 Sami Aji, or better known by the name Aji Brokenbones, born at July 7th in Jakarta, is a university graduates from Universitas Pasundan (Bandung, Indonesia), majoring in art music, started his career from band festival event in Jakarta and Bekasi. Eldest child in the family, he was playing guitar since his 2nd elementary school and began seriously exploring the guitar since his junior high.
In 2008 he decided to move to Bandung in addition to running his activities as a student. He also active in off-campus activities such as setting up a community of Indonesian guitarist named Indonesian Guitar Community (IGC).

In 2011, he became the opening guitarist at guitarist concert Mattias "IA" Eklundh, a Swedish guitarist and vocalist of the band "FREAK KITCHEN". Nowadays, Aji is focusing on his solo guitar, while he also managed his own rock band called BrokenBones (Yngwie Malmsteen cover band).
He was currently being released a solo guitar album under the title "Save Our Culture Of Sundanese". The album itself is unique since it combines neo-classical music genre, orchestral harmony and ethnic Sundanese style. The album will be released by SHREDGUY RECORDS, a prominent record companies from the United States specifically for Shredder style guitarist.

Aji brokenbones - Warning of the death