Guthrie Govan: The Aristocrats guitar star gets rigged by metalsucks.net 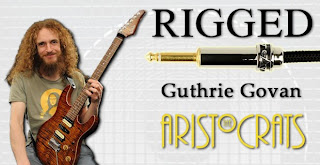 The Aristocrats — the funky, jazz, oftentimes metallic three-piece comprised of Guthrie Govan, Bryan Beller and Marco Minnemann — released their sophomore full-length Culture Clash in July (check out a clip from the album here). Bassist Bryan Beller shared his rig with us last week, and now it’s time we hear from the band’s guitarist, the legendary Guthrie Govan, who has played with Steven Wilson and Asia, among others, but is most notable for being a general guitar badass all on his own. Follow along today as Govan breaks down the rig he’s using on The Aristocrats current tour.