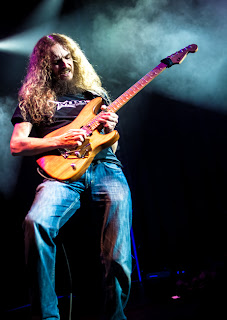 By definition, an aristocrat is a member of a "government by the best individuals or by a small privileged class." The chops-heavy trio of guitarist Guthrie Govan, bassist Bryan Beller, and drummer Marco Minnemann could be easily voted into office if the main issues were musicality, a progressive approach to instrumentals, and overall ability to create face-melting solos.

With Culture Clash, the group members (now with some road time under their belts) sound more comfortable and more willing to trust each other musically. " We're happier with this album,” Beller says. “The material, we feel, is more cohesive as a band. We like the sound of it better. The first one was done so quickly we didn't really know what we had on our hands because we were such a new band." Although this album wasn't recorded at a leisurely pace, it was recorded with a focus and a level of comfort that was missing from the Aristocrats’ self-titled debut.

"Spending some time on the road gives you a heightened sense of freedom. The idea that you can really write whatever you want," Govan mentions. With three virtuoso musicians, the urge to push the boundaries—not only technically, but also stylistically—can be hard to resist. "It could be as difficult as you want, or as silly as you want, or come from any absurd stylistic starting point,” Govan continues. “It will still sound like this band by the time we finish with it." We caught up with Govan and Beller after the opening night of their summer tour to discuss their approach to composition, working out some hellbilly riffs, and if they've ever wrote something that was too hard.

How did the sessions differ from the first album?

Beller: Honestly, it was about our surroundings. First of all, we worked with a comfortable, familiar engineer, someone I have done three or four records with and he mixed our first record, although he didn't record it. Second, we did it in Nashville, where I live, as opposed to all of us meeting in Chicago. I had the home-base advantage, I feel comfortable there, and I can have people staying at my house. Then there's the aspect that Guthrie, Marco, and I all knew each other better for this second record. Even though we had the same amount of time, it didn't feel nearly as frenzied when we were in the studio. The first one was just crazy.