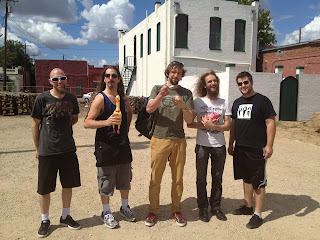 The Aristocrats
ARISTOCRATS CREW APPRECIATION! Our U.S. "Culture Clash" tour is now over, and we are SO grateful to everyone who came out and made it such a huge success. We love you all!

Marco already mentioned this but we wanted to say it officially on the band page: We have special love for our two-man crew who were with us every step of the way for 6 1/2 weeks, and honestly, who worked harder than we did. In this picture, the guy on the left is Chris Del Nostro, who was our only stage tech and drove the cargo van for all 9,000 miles. He went FAR above and beyond everything we asked him to do (and he is a car mechanic and car stereo ninja to boot!). Now we know why Dweezil Zappa uses him for Zappa Plays Zappa tour - because he's awesome.

On the far right is Corey Madson, who sold merch for us and drove the minivan (yes, we lived the dream in a cargo van/minivan caravan for 6 1/2 weeks!) for every mile as well. He has MAD Excel skills and was a merch balancing machine, as well as being super nice at all times in the face of serious adversity (like a good Wisconsin-ite).

These two Aristocratic soldiers made it possible for us to show up and put on a great show every night. They deserve your appreciation - and, of course, ours. And they're still working right now, driving the vehicles back from Austin to Nashville while Guthrie flies home and Marco and I (BB) fly to San Diego for the start of the Joe Satriani tour.

More appreciations and tour wrap-up news (including the Culture Clash vinyl release!) in the coming days...