on September 23, 2013
#Eric Gales says influences of the late Shawn Lane are in the grooves of his new album. W

Eric Gales can hear shades of the late Shawn Lane, a fellow Memphian and internationally acclaimed guitarist, in the songs on Gales’ new album, Ghost Notes.

“It’s an instrumental album, which I’ve never done before, and that’s what he did — instrumental stuff,” says Gales.

Shawn Lane. Photo courtesy Crafton Barnes.
“When you hear them you’ll know exactly what I’m talking about. It kind of goes into that weird Shawn Lane mode. Maybe that’s why I called it Ghost Notes.” It comes out Tuesday on Shrapnel Records.

Then on Thursday, the 10th anniversary of Lane’s death, Gales will help kick off a four-day tribute to Lane at Newby’s. He will headline the first night of the memorial. The New York progressive rock trio Consider the Source tops the bill Friday, and acclaimed fusion guitarist Fareed Haque (Sting; Medeski Martin & Wood) will headline Saturday with his band Mathgames.

All three nights will be filled out with a number of guest performers, including Paul Taylor, Tommy Burroughs, Hal Butler, Jon Paget and Andy Tanas. On Sunday night, the memorial concludes with a free open jam and videos of Lane performances. 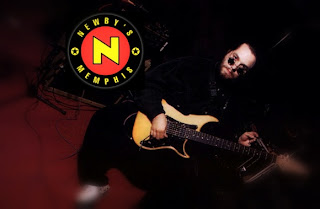