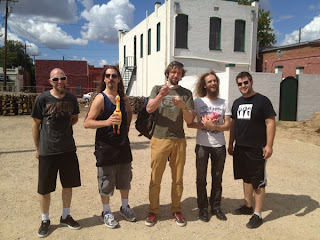 Hello everyone,
The Aristocrats “Culture Clash” U.S. tour is now in the books, and it was a rousing, blowout success, exceeding all expectations we ever could have hoped for. There is no way we could possibly express enough gratitude to all the people who came out to see us across the eastern and midwestern U.S. We played a ton of cities we’ve never been to before, and every single time, fans came out and made us feel welcome. THANK YOU everyone!
It was all done in two cars with just five people – three band, two crew – and we hardcore DIY’d it across America, with our two-man crew overcoming sleep deprivation and other obstacles to make it all work. Here’s a shot of the entire touring entourage below (L to R): Chris Del Nostro (driver/stage tech), Bryan Beller, Marco Minnemann, Guthrie Govan, and Corey Madson (driver/merch). It was taken in Lockhart, TX, outside one of the most famous BBQ joints in the U.S.A, Smitty’s Market.

We’re also happy to announce that we're very close to launching the presale for the limited edition double-vinyl version of Culture Clash. We're talking less than two weeks here. Watch this space for news on that, as well as details (as we know them) on a full 2014 touring schedule, coming very soon in another e-mail from right here.
We're all still in a bit of shock that the album hit #8 on the Contemporary Jazz Billboard chart (did you know that?!), so again, thank you to everyone who went out and bought the album to help make that happen. :-)
North American Tour
Meanwhile, for our North American friends, our U.S. booking agency, Blue Mouth Promotions, LLC (BMP), wants to get an idea from you, our fans, about the best places for bands to play in your area. To be clear, this doesn’t guarantee we’ll be playing in your backyard next time we’re out, but if we can help BMP identify great venues and contacts they’ll have the potential to send some fantastic bands your way. We couldn't have done the U.S. tour without them, and we can’t think of any better way to find the best places than to see where you go to listen to music!
Not all venues are right, so here’s what we’re looking for:
1. Venues with approximately 150-600 person capacity (again, U.S.A. only for now please!)
2. Great sound system and sound guy
3. THE place to play in town, even if it’s not quite as described above
4. Links and contact person/number at the venue if you know anyone there
5. City and State of venue
For this exercise, please reply directly to BMP at thearistocrats@bluemouthpromo.com.  They’ll gratefully look into all your suggestions.
We know we didn't get *everywhere* in the U.S. (hello western and northwestern cities) and Canada this time around, and we're going to rectify that in the future, even if we can't do it tomorrow.

Mike Keneally New Album
Last but certainly not least, The Aristocrats would like to let you know the latest about a dear musical and personal friend of ours: The one and only Mike Keneally, who has a new album out called You Must Be This Tall. It’s a typically wide-ranging and fearless piece of work, and features performance by Bryan Beller, Marco Minnemann, Joe Travers (Zappa Plays Zappa drummer), Rick Musallam, and a one-song collaboration with Andy Partridge of XTC. We think it's awesome and deserves your attention! 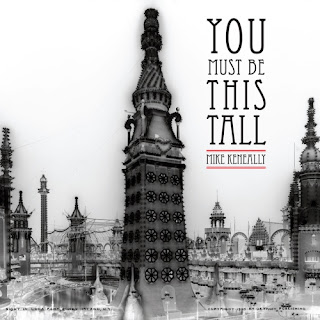