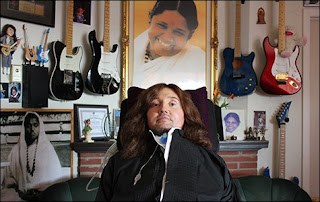 By all accounts, Jason Becker was supposed to be a star — or, at least, a very famous guitar-player. The Richmond native began playing at age five. By sixth grade he was covering Bob Dylan at his school talent show, and not long after he was mastering Eric Clapton guitar solos note for note. He spent his teenage years absorbing Bach fugues and writing his own compositions, incorporating complicated classical elements. While in high school he signed a recording contract with Shrapnel Records and finished school early to tour with his heavy metal band, Cacophony, with fellow guitar player Marty Friedman, who later went on to play with Megadeth. In the mid 1980s, while still a teenager, Becker was playing on stages in front of big crowds, his face appearing in magazines. He seemed to be on a meteoric — and unstoppable — rise to fame.

It's hard to fathom, but the ideas that emerge from Becker's head are fully realized, orchestral compositions. Becker said it takes him a minimum of a couple months to write one song — which he does one note at a time with the help of his father, Gary Becker, who transcribes his ideas using a computer. Where does he get his inspiration? "Oh, various places," Becker said. "Some from my musical influences, some just comes out of a silence or my noodle [brain] or just things from life that aren't even in music, just feelings or emotions." He said he listens to all kinds of music; some of his favorites are world music, Peter Gabriel, Philip Glass, Mozart, Stravinsky, and Dylan — "all kinds of crap."