Mike Stern: Chromatic Arpeggios and Soloing on "Out of the Blue" 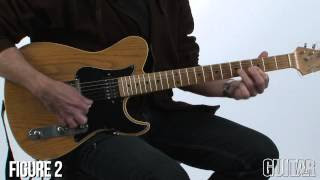 The following content is related to the October 2013 issue of Guitar World. For the full range of interviews, features, tabs and more, pick up the new issue on newsstands now, or in our online store:http://store.guitarworld.com/collecti...

My last two columns have been dedicated to the track "Out of the Blue," an original composition from my latest release, All Over the Place. Last month I discussed a few ways to approach soloing over the tune, and I'd like to continue on that tack this month by detailing a specific soloing concept that I often like to employ, which is the use of arpeggios combined with chromaticism (using notes a half step, or one fret, apart).

Like a standard blues form, the "Out of the Blue" solo section is 12 bars long, starting with four bars on the "one" chord, G7, followed by two bars on the "four" chord, C7 and then two more bars back on the one, G7. The twist comes in the last four bars, in that, in bars 9--11, I establish an Ef7-F7 alternating-chord sequence, followed in bar 12 with a single bar of the flat-two, or flat-nine, chord, Af7.