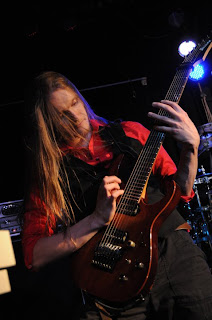 The first Fountainhead EP, "Fear Is The Enemy", was released digitally in January 2013.

Reviews so far have been very positive:
"for lovers of virtuoso guitar music, this album is moreover highly recommended" (http://www.progwereld.org)
"A timeless journey through different kinds of music {…} greatly enchanting songs {…} which I could imagine working well as film-scores too." (http://www.metalunderground.at)
"Fear is the Enemy is a veritable masterwork. It is the product of years of training from one of jazz fusions most promising guitarist. This is a shining and monolothic artistic statement that proves the enduring might that a virtuoso guitarist can have" (http://twoguysmetakreviews.blogspot.fr)
"If you want to know how thrilling a well-made mix of ambient, atmospherics, fusion and tech-metal can be, listen to this. It´s very rewarding!"(http://www.babyblaue-seiten.de)
"With ‘Fear Is The Enemy’, Fountainhead (...) is surely bound to impress those who have a ear for appreciating music per se." (http://www.metalwani.com)
"This is one of the projects that will influence new bands to come because of its creativity and quality sound." (http://www.progpizza.com)
"Fountainhead provides a mind blowing trip into musical realms largely untraveled. This is pure, instrumental greatness with a creative, Progressive Metal edge." (http://www.thecirclepit.com)
"stunning, yes stunning music and guitar" (http://thruthinshredding.com)


The whole thing is still fully streamable on bandcamp and youtube. The pay-what-you-want download comes with full artwork and a beautiful music video that video-producer Martin Bahre created with me. It´s also available on all of the major online-stores (includingiTunes and CDbaby). Every cent I make off this album is being invested into making the follow-up, for which I´ll enter the studio next month.


Collaborations and session-work"Pitts/Minnemann Project"
Last year, the "Pitts/Minnemann Project" CD was released to great critical acclaim (http://www.metalwani.com even proclaimed it "instrumental album of the year"). It´s part of drumming phenomenon Marco Minnemann´s Normalizer 2 series, which involves various artists from across the globe composing music on top of a 60-minute drumsolo by Marco - in this case the composer is Jimmy Pitts. I had the great honor to be the main guitar player on this album (which also features guest contributions by Jeremy Barnes, Pete Pachio, Bill Bruce, Ray Riendeau, Eddie Kohen among others), contributing more than 30 minutes worth of fretted and fretless guitars. There´s audiosamples off all tracks on cdbaby and I uploaded a compilation of some of my favorite guitar parts here. Because of the terrific reactions to the album and the strong musical chemistry between the players, I´m happy to announce that "Pitts/Minnemann Project 2" is already in the works and features Marco on drums, Jimmy on keyboards, Jerry Twyford on bass and myself on all guitars.

"The Fractured Dimension"
There´s another collaboration with Jimmy Pitts coming out very soon, a new album by his band "The Fractured Dimension". Having already contributed guest solos to their first album a couple of years ago, I was invited back for the follow-up, which features the following line-up: Jimmy on keyboards, Jerry Twyford on bass, Hannes Grossmann (Obscura, Necrophagist) on drums and myself on guitars, plus guest solos by Jeremy Barnes, Pete Pachio, Marcel Coenen, Bill Bruce, Alex Machaczek & Aaron Roten. An advance-single (a "farewell" to and featuring former drummer Alex Aranello) will be released digitally in just a few weeks. Expect some crazy instrumental prog-metal and tons of wild guitar playing!

Ray Riendeau
In spring, I was also invited by Ray Riendeau (bass player extraordinaire for James LaBrie, Rob Halford, Star Monarchy etc.) to join him and drummer Danny Handler on a track called "The Conservation of Angular Momentum", which is available from Ray´sbandcamp . Check out my full guitar playthrough-video of the song here.

Music-production & mixing-work
These are some of the projects I´ve been working on in the last few months, for release-dates and artwork please check the "discography" section on my website. Since most of these have not been officially released at this point, audio-samples will follow in the next newsletter.


Ever since "Fear Is The Enemy" was released, a huge amount of new projects has been coming in. So if you want to have your music produced or mixed by Fountainhead, don´t hesite to get in touch, but please be aware that I´m completely booked until early 2014.


- Interviews:
There´s a two-page interview in the January/February 20213 issue of the leading Indonesian guitar magazine "Gitar Plus", topics include: my role in the "Pitts/Minnemann Project", "Fear Is The Enemy", practising, gear, influences, etc.


- Compilations:
Itdjents have issued a compilation called "introspection/self-actualization", which includes my piece "I Do And I Will" and some liner-notes. You can download it here.


That´s all for now, folks. As I already stated at the beginning of this mail, the next newsletters will features exclusive previews on the content of my next EP.