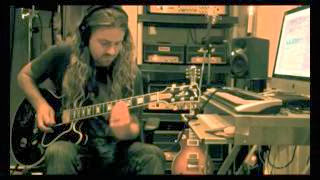 Swedish Doom gathering AVATARIUM has just put out a solo trailer for their first two singles ''Moonhorse' and its , B-Side track 'Boneflower', that have been released on September 20, 2013 via Nuclear Blast.

Get your copy of 'Moonhorse' here: http://smarturl.it/AVATARIUM-Moonhorse.

Commented guitarist Marcus Jiddel on creating the solo parts of 'Moonhorse': "I was asked to play the two solos for 'Moonhorse' but since both these solos are totally improvised there wasn't a chance that I could play the same thing again. So I did two new solos in front of the camera where I tried to put in the same feel as in the album solos. I hope you'll enjoy."

And on the video itself: "This is how I play the riffs from 'Moonhorse' and 'Boneflower'. When I sat down and filmed this I really felt how much I want to play these songs live, can't wait!!"