Brian Auer,Ed To Shred: Guitars Under the Stars - international contest 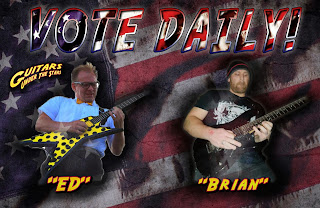 Guitars Under the Stars
Two phenomenal Oregon guitar players are in the 2nd stage of an international contest competing against players from all over the world. Brazil, Germany, China, Sweden, the Middle East, Italy and more. One contestant's country posted on their website(The country's official website!) to bolster their player... a whole country is voting! Another in South America has his whole town voting. So, we wanted to help our guys compete! We root for Olympic athletes… I can guarantee you that at the level these guys play they've put as much time in practicing as an Olympian. Let’s back these guys up!

You can vote once a day until Nov. 20th. If everyone on this page voted they would make it into the Top 15 for the final Judging round! So, give these guys a couple clicks and show the world that the Northwest kicks out some great musicians!

Follow the links to Vote for ED and Brian!