Guthrie Govan, Owen Edwards: All Out Guitar interviewed Guthrie back in 2006 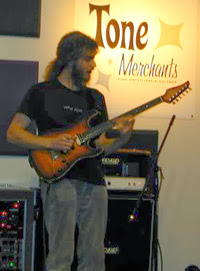 There was a big buzz in the UK guitar community about these competitions – did you manage to see the first Guitarist of The Year Final, which Dave Kilminster memorably won?

Yes I saw Dave’s Final, and was thoroughly impressed! That first year was different to later ones in that there wasn’t the element of competing live with fellow finalists – that started in the year that I won. For the first competition, I think what happened was that they listened to all the demo tapes, decided that Dave’s was the best… and as his punishment for winning, they made him play in front of hundreds of other guitarists at one of the London Guitar Shows!

Anyway – in my year, the organisers had whittled it down to six players, and we all had to get up on stage, one after the other, and play our tunes on a live stage at that year’s London Guitar Show – this time with a panel of judges watching. I remember being highly amused by the fact that these included Tommy Vance and Martin Taylor – picture Martin and Tommy at the same table judging the same music! But apparently they both liked what I was doing.

It did indeed, and I suppose it was around 1991. The first demos were done at a time when I was listening to a lot of Vai and Satch, mixed with a lot of Prince, some country stuff, a bit of John Scofield and Mike Stern, some sax players and of course plenty of Zappa. I guess I was trying to come up with some guitar music that wasn’t the same as what everyone else seemed to be doing. Obviously it had to have some technical elements, but I was trying to write stuff that had some melodic interest and I wanted to make it funkier and groovier and a little less dark than most of the straight ahead rock instrumental guitar fare I’d heard. I had waded through an awful lot of music that I didn’t really enjoy in order to study the mechanics of the instrument, so I was determined to find some kind of fresh approach where that technical vocabulary would still work. I guess the earliest stuff probably came out sounding like a funkier Satch, that kind of idea. What also influenced me a lot, when I got into the recording thing more seriously, was the idea of taking inspiration from something as simple as a particular sound, or trying to fuse two apparently unrelated styles, or trying to emulate another instrument on the guitar – anything to get away from being technical and “shred” just for the sake of it. For whatever reason, Mike Varney seemed to like what I was doing and offered me a record deal.

To be honest it was very scary at that age – I think a lot of teenagers would be daunted by the prospect of being flown across the Atlantic to record an album very rapidly with musicians they’d never met – so I suppose I tried to put Mike on hold for a while, saying that I was flattered, I would like to do this but I didn’t think I had enough material that was of a high enough standard. Mike reassured me that he thought the playing was great, which was the main consideration for the average Shrapnel record buyer. In the midst of all these things which had cropped up so suddenly and clearly warranted so much serious consideration, something else crossed my mind. Once this hugely influential figure in the world of extreme guitar playing had given my music the ‘thumbs up’ I needed so much, I started to question the whole point of these albums. What actually happens when you release one of these? And what I concluded, rightly or wrongly, is that people will buy your album because they’re looking for new technical tricks, some new ways to sweep an arpeggio or skip a string or tap a note. They’ll slow it down, learn it and then one day you’ll hear their album, which will be the same as your album but 10% faster and possibly less musical.

I settled on the idea that if I was going to have a recording career I would rather have the music as the focal point, with the guitar just functioning as a tool of the trade. Getting encouragement from Shrapnel was great at the time, but it all just felt a bit too guitar-centric for the player I wanted to be. I also wanted to devote more time to finding a distinct direction for the music I was making, before making any bold statements to the world!
Funnily enough, the same sort of thing happened about a year later with Mark Varney – and he was even more straightforward about it “0h, don’t worry about the compositions – the people who buy our records just want to hear loads of burning guitar” – I know he meant well, but it made me feel a little uneasy!