Ryan Buckner: How To Quickly Think Of Good Ideas For Songwriting 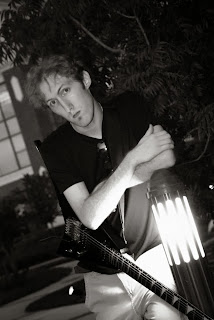 How To Quickly Think Of Good Ideas For Songwriting
By Ryan Buckner
The Holy Grail of songwriting is being able to quickly think of new ideas for songs in a short amount of time. If you are unable to do this right now, it is likely due to the fact that you are using one of four limiting approaches to songwriting. Before you can start writing truly great songs (that express exactly what you want) you must take on several new approaches.
With this in mind, here are two steps you should take right now to get started on creating tons of new ideas for writing a song:

Step One – Learn why your music doesn’t sound how you want it to by downloading a free songwriting guide to help you write music that sounds great. This resource will jump start your creativity to help you quickly think of new ideas.

Step Two – Once you have downloaded the previously mentioned resource, read through the remainder of this article to learn the four biggest mistakes that may be limiting your creative potential right now (use both the article and the resource together to get the very maximum benefit).
Now that you have downloaded the songwriting resource from above, continue reading through the points below to learn the four mistakes that keep songwriters from thinking of good ideas for writing a song:

Mistake Number One – Not Writing With Multiple Instruments
Do you often try to write ideas for songs using ‘only’ the instrument you are good at? Most musicians use this exact same approach and frequently struggle to think of great ideas in their songwriting. Why does this happen? When you only use one instrument for writing songs or musical ideas you not only limit yourself to the same ‘usual’ set of techniques or patterns that you are used to playing but you also limit yourself to the specific style and overall sound of the instrument itself. For example, if you always write on guitar, you will be more likely to play the same licks and phrases over and over. This will limit your music to a ‘guitar songwriting style’ that will make it difficult to write for other instruments you may want to include in your songs. Instead of doing this, choose a few additional instruments and learn how to write song ideas with them. This will open up your songwriting to a new dimension of possibilities and make you a much more well-rounded musician.

Mistake Number Two – Having Nothing To Actually Say In Your Music
If you do not already have ‘something to say’ in your music, it will be increasingly hard to think of ideas for writing a song. There is an endless amount of musicians who have never really thought about what it is that they want to say in their music (they only think about writing cool melodies, guitar licks, etc.). In the long run, you MUST have something to say if you want to be able to consistently come up with awesome songwriting ideas. Inspiration is the foundation for musical creativity and without ‘something to say’ you will quickly find yourself struggling to think of new ideas for songs.

Whenever you go to write a new song, invest time into thinking about the specific thoughts, ideas and emotions you want to express in your music. By doing this, you will greatly enhance your ability to think of new ideas for songwriting because you have narrowed down your options for ‘anything’ to one specific topic. For example, once you know that you want to write a song that expresses the emotion of ‘anger’ it will be much easier to think of ideas for your music because this emotion lends itself to various musical techniques such as using faster rhythms, involving dissonant harmony and so forth.

Mistake Number Three – Not Practicing Your Songwriting And Measuring Progress
So many musicians never improve at songwriting or think of good ideas for songwriting because they don’t think to actually ‘practice’ or measure their progress. For some reason, the majority of songwriters falsely think that creating music is a skill that one doesn’t practice since it has to do with creativity/self-expression. This thinking is totally backwards! Some musicians create a lot of music, but do not have any effective strategies in place for getting better at songwriting and improving their ability to consistently think of new ideas. Similar to how you would construct a practice routine for practicing your main instrument, you must also ‘practice’ songwriting and consistently measure your progress in order to get better. That said, you don’t have to write a whole song in order to improve your songwriting (using this approach may actually take you longer to see in results). Alternatively, target the exact areas you would like to get better at in your songwriting and focus to improve only in those areas with total dedication. When you use this approach, you will quickly become much better at coming up with ideas for writing songs because you will be in the habit of writing in different musical situations with different musical elements (ex: writing great melodies, choruses, vocal lines, etc.)

Mistake Number Four – Writing Music In An Overcomplicated Manner
In some cases, songwriters struggle to come up with great ideas while writing songs and decide that the solution is to ‘add more’ on top of whatever ideas they already have. These musicians have difficulty coming up with creative ideas because they are in the habit of adding on more and more until everything becomes a big mess of lackluster ideas. Songwriters who make this mistake usually take a ‘spray and pray’ approach – hoping that something will ‘stick’ and randomly sound good. Although it is certainly a good thing to experiment by combining different kinds of musical ideas together, this approach will not bring you much results.

To avoid the problem of over-complicating your music, instead focus on using a more ‘simple’ approach. Certainly it is cool to write complex and engaging music, however, when you are struggling to think of new ideas for writing songs you will come up with ideas much more quickly by starting things off simple. In other words, start your songwriting session with just a few chords or a short melody and really focus on getting the very most expression out of just these basic things. Then later after you have worked on these ideas, you can come back to them and ‘add on’ to them to make them more complex if you like (to get advice on this specific topic, download this free guide on how to write music that sounds great).

Now that you have learned four huge mistakes that are ‘limiting’ your songwriting plus the solutions to help you solve them, get started implementing these ideas into your songwriting right away. By doing this, you will quickly see progress in your ability to come up with more/better ideas for your songs. Download this free resource on how to write music that sounds great to get additional innovative songwriting ideas that aren’t shared with the public.


About the author:
Ryan Buckner is an accomplished guitarist and songwriter who has been writing instructional material about guitar playing, musical composition and music theory since 2006. He helps musicians worldwide learn how to write a song step by step on his songwriting website.