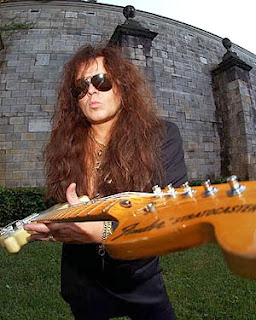 In the book, you talk about your first gig in the States, where you played with Steeler for about 30 people.
It was at the Country Club in Reseda, in February of ’83, and we were opening for Hughes/Thrall. For some reason there was nobody there, maybe it was the middle of the week, I have no idea. But the thing is, I remember vividly that there were very few people there and I really didn’t care. I was just doing everything that I do. I thought, “I’m in f***ing America—I’m going to go full out.”

Your second gig had a line stretching around the block.
I remember looking down the street and asking somebody that worked backstage, “Who’s playing tonight? Who’s the big draw?” The guy said, “You are.” It didn’t quite sink in, you know? I was never aware of it myself—that’s what’s so weird. When I decided to write the book, I wanted to include all of these events as they happened, but not necessarily as I experienced them at the time.