David Locke: Riding Out Youth - Pro Series - we take a deeper look at the new album

David Locke is based in Banbury, England. He is a stalwart of the YouTube scene delivering great cover versions of classic rock songs with great attention to the tone and for the quality of sound. These skills have made him a much in demand as a guitar teacher.


On the album David Locke plays all Guitars, Bass Guitars, Keyboards and Drum Programming.  The songs are well crafted and recorded with an attention to detail, no song is a filler, each honed to a musical perfection.

The title track of the album is first up and is probably my favourite of the album.  I wasn't sure what to expect from David and so it was a very pleasant surprise to me that the albums opener would lead the way to what is a great rock and rock fusion album.  The solo work on this track is superb, controlled, but with enough passion and aggression to appeal to those fans of more metallic styles.

He wears his influences on his sleeve with the track "A Glimpse" having Planet X, Virgil Donati like qualities in particular. All good things in my book. The music is inventive, progressive and more complex, rock fusion with twisting musical passages and hot fusion soloing. Soloing as though David Gilmour was reincarnated, deciding to step it up a gear and rip out some bluesy fusion licks.

The track "Thoughts"  is more an acoustic ballad AOR feel.  The solo opens with a more fingerstyle Mark Knopfleresque flourishes and advances more to the sort of classy guitar work that you'd hear from Neal Schon.  The track "Tomorrow, Today " also has that classic acoustic ballad feel, both are tracks that show the lighter and studio friendly qualities of David.

Dreaming reminds me more of classic Garsed in parts, the slide work over a easy paced fusion backing track.  It's the sort of track that would fit neatly on to Brett's Dark Matter album. All good stuff to be sure!

The tone throughout is classic and creamy, buttery overtones with great intonation, the sort of trademark soloing you hear from stadium rock artists. All great stuff, creamy rock filled leads, flowing over into fusion, progressive compositions and enough guitar ear candy to too make this album one I wouldn't hesitate to suggest adding to your collection.


about
This is my first, official Album. It's a journey through my life, with songs written over the years, now re-worked and recorded over the past 9 months. From Progressive to more subtle styles, there is something for most music lovers to appreciate. I would like to thank everybody who has supported me throughout the years, and I hope I've made them proud.

credits
Released 01 November 2013
I'd like to thank Gavin Coulson at Fret-King Guitars providing me with such great instruments to express myself with. Also I'd like to thank Ian Maynard for the Artwork and promo shots. Thanks also goes to Josh Guyan for his inspirational chord work in Riding Out Youth.

I'm using Hughes & Kettner Amps and my Kemper Profiling Amp throughout the Album. Guitar-wise, most solo tracks come courtesy of my Fret-King Eclat or Fret-King Corona 60 Stvdio. All the 7 String Rhythm guitars were performed on an Ibanez Universe, and using the Kemper. Brief encounters of the acoustic kind come via my Takamine (I forget the model).

All instruments are performed by myself. I'm using a Vintage V10004B Bass guitar through a SansAmp Bass Driver DI and a Yamaha MM6 for keyboard/piano and synth sounds. I programmed the Drum tracks. I recorded and produced this using Pro Tools 10.


We talked to David Locke about the production process for his album, and here's what he had to say

How long did it take you to record the album?

[David Locke] It took me just over 9 months from start to finish.
How did you know when you had finished the album?

I set myself a target to have released the album by December 2013.

How do you know when a track is finished?

[David Locke] To be honest, I don't think I ever am completely happy with a track, I always look back and hear and see things that I could change and improve upon. I didn't use any punch-ins so there are some 'mistakes' captured, but I didn't want to make an album that sounded too produced and clinical.


How do you decide what is going into a track and how do you name it?

[David Locke] Most of my songs start off from the drum track. I love experimenting with rhythm, Looping a beat and trying to write something to fit it. It's probably not the traditional way of writing, but it means that the focal point isn't just a guitar melody, or riff. It opens up the song to more than just another guitar instrumental track.

What equipment did you use in the studio?

[David Locke] I used an Ibanez Universe for all of the 7-string Rhythm tracks, and Fret-King Corona 60 Studio, Eclat and Country Squire for solo's. I really love the way the Fret-Kings have a traditional vibe but without some of the traditional issues you sometimes find with older guitars. Amp-Wise, I used a Hughes & Kettner Tubemeister for some Rhythm tracks, A Laboga Alligator Twin on 'Dreaming' and the rest was recorded through The Kemper Profiling Amp. I found myself generally using a combination of Mesa Triple Rectifier/Bognor Ubershall for rhythm guitar, and then either Marshall JCM 800 with Top Boost and Bogner Ecstasy for Solo's.

How did you record the drums for the album?

[David Locke] I programmed the drums for the album, using the Xpand plug in that came with Pro Tools 10. When Programming, I really tried to imagine how a drummer would play, I can play drums, to a point, so I tried to program them with that in mind. It has to be playable, and not too consistent, to sound like a drummer. Some of the fills took me a while to program, but I'm fairly happy with the results, although since then I have upgraded to EZ Drummer. I'm really excited now to get some more music out there.

Do you approach an album as though it is you meister work?

[David Locke] I obviously want to be satisfied with my work, as much as is possible at least. I look at this as the first of many though, and hopefully each album that follows will be an improvement.

When the album is done how do you feel about it?

[David Locke] I'm quite happy so far, and although I've heard each song a million times, I'm not sick to death of it.....yet.

Did you have a budget for the album?

[David Locke] I didn't have a budget as such, It was all self produced and I couldn't afford to have it professionally mastered so I used Ozone 5 software to try to give it a little sheen.

How did you go about your promotion strategy?

[David Locke] Promotion has so far only really been through my Facebook page, although I've had a mention in the latest edition of Guitarist Magazine. 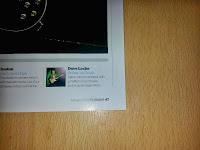 How did you decide what the album title and design would be?

[David Locke] I named the album after the track Riding Out Youth because I feel this track sums up what the album is all about.

What were your musical influences on this album?

[David Locke] Influences for me come from melodic players like Gilmour,  Brian May and Mark Knopfler but then I love the fusion players like Brett Garsed, Shawn Lane and bands like Planet X and anything that involves the drum work of Virgil Donati.