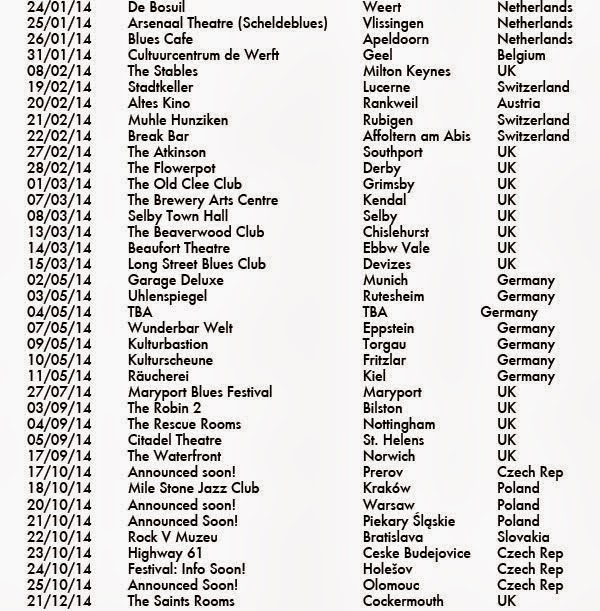 It's time to hit the road again! tour dates http://www.dannybryant.com/upcoming-dates/

This weekend we are heading to The Netherlands for three shows, two of which are special 'Blues Nights' with our good friends The Nimmo Brothers. Danny first played gigs with Alan & Stevie when he was just starting out (about 15 years ago now)! They are two of the nicest people on the music scene, not to mention two of the best musicians. It's going to be a fun weekend!


We have a string of Swiss/Austrian gigs from 22nd-26th February. Then in late February & early March we will do a small UK tour which includes shows in Southport, Derby, Grimsby, Kendal, Selby, Ebbw Vale, Devizes and Chislehurst. Full gig listing below and here.

Danny will be releasing a brand new album at the end of August. This will be followed by shows all across Europe. Some venues have already been announced, but where would you like to see Danny and the band play? Reply to this email and let us know!

Once again, thanks for supporting the Danny Bryant Team!

Are you a blues fan with 10 minutes to spare?
If you are a fan of the blues, you can help us find out more about what it is that makes the blues unique. A friend of mine is conducting research around the relevance of the blues in the 21st century. You can help by following the link below and taking the online survey. Afterwards, please share with friends, who also might be blues fans. Thanks for your help!