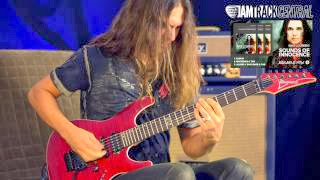 Sounds Of Innocence is Kiko Loureiro's fourth studio album, and takes influences from jazz, blues, traditional Brazilian music, and mixes it with progressive metal to create an album full of fresh sounds while remaining true to his progressive metal roots. Felipe Andreoli and Virgil Donati provide bass and drums throughout.

Within the first few seconds of "Gray Stone Gateway" you can see why Loureiro has been ranked as one of the top guitarists in the world. This is a player who is at the top of both his creative and playing game, and the album shows why. He doesn't set out to give you ten tracks of pure shred, but take you on a musical journey with many vibes and excellently constructed solos throughout. This album is a great piece of progressive metal art.

This edition is for the guitar playing fan who doesnt't yet have the album and who wants to learn how to get it as well as learn to play it with the official album backings. Included is the full labum and artwork, plus 102 pages of TAB/notation for every track, as well as 5 bonus live video performances filmed by Kiko exclusively for this package. These include Gray Stone Gateway, Ray Of Life, Reflective, The Hymn and Mae D'Agua (making up over 22 minutes of footage) and are a wonderful addition to the package because they show you just how he cuts down some of the complex arrangements for live performance.
*NEW* Kiko Loureiro 'Sounds Of Innocence' at jamtrackcentral com