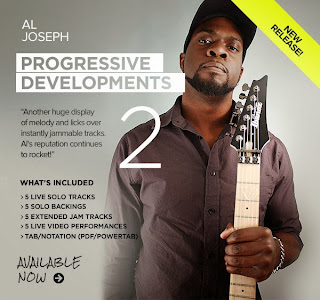 Al Joseph's reputation has rocketed over the last 12 months following the introduction of his debut jam track series Progressive Developments Series 1 and debut album Out In The Open, both released at JTC. What do you expect? The guy creates incredible tracks, full of melody and licks that get you needing to pick up your guitar to learn and jam!

In true style, Al has done it again with his second bout of Progressive Developments. This time we have 5 brand new jam tracks, mixing many heavy rock vibes, influenced by the likes of Pearl Jam, Creed, Deftones and the king that is Petrucci (one of Al's main influences). Not only are these tracks really great for jamming over, but Al has created some incredible solo ideas for you to analyse using the live video takes and our trusty transcriptions. What we love about Al is that he gets that blend of melody and emotion into his solos, mixing it up with some superb licks and runs in the process. He isn't afraid to slow it down, when required. Throughout this series, he does just that.....and then he also puts some serious licks out there too! There is something for everyone here!

So check out the previews below and get ready to rock!