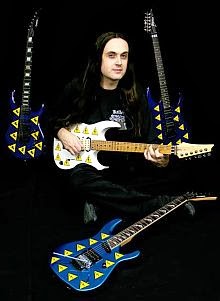 Bio
Daniele Liverani is nothing short of prolific, having released more albums than many have had hot dinners. He started music at a young age, at just 6 years old he started studying classical music and piano, Daniele graduated going through all the main classical composers. Daniele was self taught on the guitar, applying all the notions he learnt composers: Bach, Mozart, Chopin and Debussy.

In 1993 Daniele won the 1993 Artist Without frontiers Best guitar player . A contest in ROME with 150 guitar players from all the nation, judged by many of the main journalist and professional musicians of the sector. The prize enabled Daniele to attend GIT in Los Angeles.

In 1994 Daniele won the European Musician Home Recording contest and the magazine. Hr retured to LA in 1985 to self produce a demo album with Joey Vera and Ricky Wolking and Julio Mathis. He also returned to playing keyboards. His View point guitar solo album has been finally released from Virtuoso Records in May 1999.

In Summer 1999 he recorded the 'Daily Trauma' instrumental album that has still to be released. This album is the mother of Genius Rock Opera concept and it's a sort of first experimentation of its sound...This will be released by Frontiers Records on May 2004 as a bonus release of Genius Trilogy!

In December 2002 I contributed with my composition 'Meteor' to the Jason Becker tribute album 'Warmth in the wilderness' bol 2 released by Lion Music.

In April 2003 he released the KHYMERA album with Frontiers Records.This is very straigtht Rock-AOR album that he recorded with the great Steve Walsh of Kansas at the vocals and Dario Ciccioni at the Drums. Great backing vocals by Joe Vana, Thom Griffin and Billy Greer, Daniele arranging the recorded Guitar, bass and Key parts.

In December 2005 he released the second KHYMERA album titled A New Promise', with Frontiers Records.Still another very straight Rock-AOR album featuring Dennis Ward on vocals and bass, Dario Ciccioni on Drums, Tommy Ermolli on Guitars and Daniele on Keyboards.

In June 2007 Lion Music/Finalnd released worldwide the first album of this brand new band: 'The Music That Will Heal The World'.

In February 2008 he released the third KHYMERA album titled 'The Greatest Wonder', with Frontiers Records.

In April 2008 he released the album "THE COSMIC YEAR" with the new line up COSMICS I put together including Daniele on keyboards, VIRGIL DONATI on drums, RUFUS PHILPOT on bass and TOMMY ERMOLLI on guitars.

In September 2009 he released the second TwinSpirits titled 'TheForbidden City', with Lion Music.

In February 2011 he released the third TwinSpirits album titled 'Legacy', for Lion Music.

Mini review
No surprise then that the new album is accomplished and well put together, as you'd expect from a seasoned musical professional. Production is clean, clear and crisp. The mix is well spaced and not overly compressed, something that resonates with my progressive musical sensitivities. With 11 tracks and 50 minutes of music, you get quality in depth, rather than a scatter gun approach. This is a guitar players album, but it's also a progressive rock album, whose compositions should appeal to a broader audience. This isn't a shred fest, rather a well considered, rock instrumental album. 11 tracks of good quality music

My favourite track from the release is Black Horse, more atmospheric, a classy, straight ahead slow rocker. Followed closely Daylight, which has a more rock fusion approach. Heaven is more ballad AOR, tune, with histrionic soloing from Daniele. Joke is more Vai like, as a high-energy rocker. I think Apocalypse will probably only appeal the neo classical guitar fans, and probably not to those who think we are done with that genre.  Overall a well produced release and a welcome back drop to a sunny afternoon. 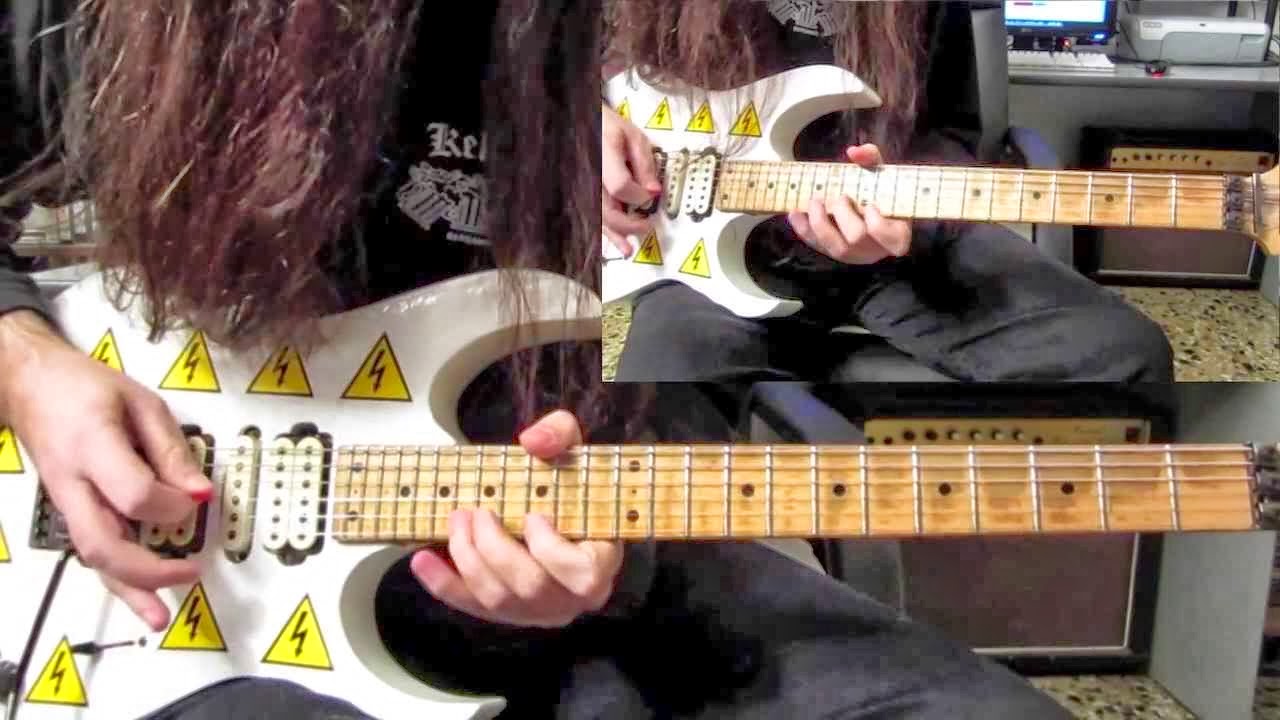 We caught up with Daniele to talk to him about his latest release.

How long did it take you to record the album?
It took about 6 Months in different periods, starting from Summer 2013 till December 2013 approximately. The sessions of drums, bass, Guitars and finally keys have been relocated in different periods during those months.


How did you know when you had finished the album?
I usually write the album in a short period of time, this FANTASIA album for example was written in a couple of weeks. I do pre-productions while writing and the the final production and arrangements starts, and those phases takes a lot more of course. So basically when I write a new project I start and finish. I tend to be very involved in the project and I do full immersion into it while it's not completed and I'm not satisfied with it.


How do you know when a track is finished?
For me it's an easy process fortunately. I've always had a good flow of idea as soon as I pick my guitar in the hands and I'm in a good mood, ideas start to flow very easily. I usually write all stuff at the moment, in very little cases I store ideas and restore them later for projects, I tend to write all at the moment due to the project I'm writing and the mood of the songs and inspiration of the moment.

How do you decide what is going into a track and how do you name it?
When I do instrumental guitar oriented album I tend to work as if I'm doing a singed album (like in many other projects I've been working lately). I write a story/concept, I picture some ideas in terms of story and events and meaning of the whole album/project and then I try to create those emotions and to express those concepts with guitar, treating it as if it was a lead singer actually. I think my guitar album are not really guitar oriented as a typical guitar solo album, they're more of a conceptual prog album where guitar is singing in some ways.

What equipment did you use in the studio?
I use very little effects and stuff during the recording of the guitars, typically I use Marshall Amps with their original gain and distortion, and my usual guitars I've been playing for ages now, some Carvins DC200, a Washburn EC29, couple of Ibanez RG models and an Hamer Californian. All guitars have some minor customization in terms of pick ups and bridges etc, but not much. I Have a small home studio for the recording with the minimum that allows me to record. I complete the sound with all effects during the mix. I use also some reamping at time to adjust and calibrate sounds during the mix. I think it's a very interesting way to get the right sound even after the tracking sessions.


How did you record the drums for the album?
Simon Ciccotti, an italian drummer, recorded the drums in studio. I do prefer to have real instruments in my album.

He listened to the pre-production where I programmed a basic idea of drums for each song and then he arranged and came up with his performances during the recording.

Do you approach an album as though it is you meister work?
I basically love playing and recording/writing. I approach each album with the best attitude possible, without too much expectation, but just naturally trying to make a good flow of ideas and a good production. Especially trying to add meaning and some sort of identity to the album. I do my best in this direction.
When the album is done how do you feel about it?

I usually feel very happy about the result of my production, generally because I tend to work until I get there. I also think that an album is the expression of one moment and I don't like to be too perfectionist and stay on ideas and arrangements for too long. I like to take picture of my musical mood and phase and put it down in music quick, without too much post production or similar procedures.

Did you have a budget for the album?
Of course the biggest expenses are on studio time booking, then comes musicians fee, artwork and mixing and mastering.

I usually fix a budget for each production and try to respect it, even if not always this happens...he he.
How did you go about your promotion strategy?
I usually work with labels, and they usually support me with good promotions. I think having a label that support you is important. It's very difficult to handle all promotion by yourself.

Basically the title is connected to the main idea of the concept of the album.
The artwork comes as a result of this title and the concept, and usually I work with the artist trying to get the whole idea alive also in a visual way, in support of the audio experience and as a sort of completing part.

What were your musical influences on this album?
Of course classics, hard rock such as Van Halen AC/DC, then Malmsteen, Steve Vai, Satriani, Becker Friedman, Dream theater to name the most important I'd say.
Some of these influenced me in terms of tone and style, some in terms of songwriting (especially Dream Theater). 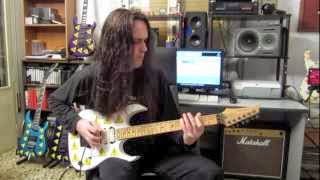 Daniele Liverani: The Making Of Fantasia